In late 2021, I decided to revisit prior attempts at AR (Augmented Reality).  At this time I was knee-deep into my backdrops project that began with Funko Pops, and had by this time decided to focus on 1:64th scale automobile collectibles.
Technology has advanced to the point that I was able to quickly make my vision a reality and within 2 weeks came up with the following backgrounds.  Each of these backgrounds trigger an Augmented Reality action that makes them come alive.

This is the very first design I created with the addition of AR.  The bear is a 3D model.  Later I realized that I could achieve some very good results without the need for animated 3D models. This background is static.

Soon the animation moved to the actual background with the use of time-lapse photography.  The flag and the telephone booth on this piece are on separate planes from the background.  Of course, British vehicles were used here; a 1963 Aston Healey Roadster, and a 1956 Jaguar XK140.

This project began with the idea first upon coming across the image of the brick building.  The entire concept hatched in my mind and I ordered the FDNY cars online.  My initial idea was to render the fire in Photoshop.  I settled on a multi-plane set up that allowed the fire to burn smoothly.  I am sure that I will revisit this one and add more elements when time permits.

A close-up shot of the door of red and white '55 Chevy that I shot over a decade ago was the inspiration for this drive-in theatre background.  The animated "Feature Presentation" activates in Augmented Reality. 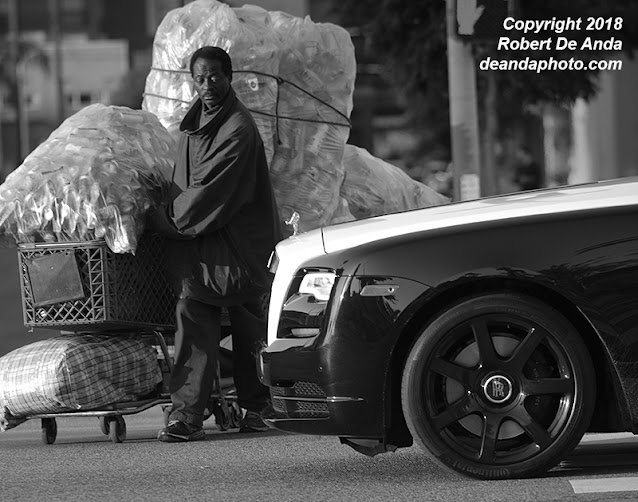 “An artist's duty is to reflect the times.” Nina Simone

California Contrast I set out to capture the orange light of the setting sun on Sunset Boulevard in Hollywood, California.  I had scouted a handful of locations that would allow the warm hue to light the street sign emblazoned with "Sunset Bl."  For this self-imposed assignment, I brought a telephoto lens.  I had a sliver of a window in time to capture the street sign and I did.  Then I walked home.  As I crossed the street, I turned back again toward north, and saw the Rolls-Royce Dawn out of the corner of my eye heading to my intersection.  I was shooting vertically, as I was hoping it would stop at the light, and the white bands on the crosswalk could be used to lead the eye towards the Spirit of Ecstasy; you can see a portion of them at the bottom right.  Suddenly a man appeared out of nowhere in my viewfinder pulling a train of shopping carts across the street.  I didn't even switch to horizontal shooting as I was now watching the scene unfold in my viewfinder.  Ther